Typical fixed mounted fans require a scheduled maintenance shutdown.  This may not be allowable in essential applications.  Our hot-swap fans may be changed in a manner of 10 seconds allowing your system to remain operational in a constant power-up processing state. 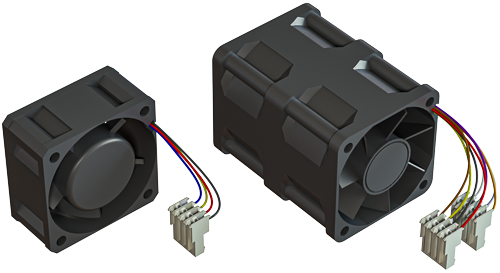 When there are multiple single rotor fans, common to many rackmount enclosures, during a fan failure the airflow direction reverses through the failed fan.  Recirculating hot air between the failed fan and nearby operating fans happens begins.  This reduces overall airflow by more than the loss of the one failed fan due to the recirculation phenomenon.  Even in an N+1 fan implementation there is a loss of airflow through your enclosure.  The percentage of through chassis loss is based upon the pressure characteristics unique to the enclosure.  Therefore an N+1 approach is not a true N+1 when a fan fails.

When using dual rotor fans there are two independently powered and monitored rotors within a single fan frame.  When one rotor fails the other rotor continues to spin eliminating the recirculation phenomenon.  Thus airflow continues at substantially the same volume.  Any airflow loss is due to performance pressure loss by the single failed rotor.  Thermal monitoring on the system board may spin up the fans to compensate.  Replacement of the hot-swap fan module may be scheduled while the system continues to operate normally.

Hot-swap fans are produced specific for your rack mount enclosure application to meet your desired electrical and thermal characteristics.  The docking connector is configured to match the position and elevation of the mating connector on your system board, backplane, or our interposer board.

Hot-swap fans may be designed to dock directly with your motherboard, through an interposer board, or directly onto a backplane.  Two, three, or four wire fans may be implemented giving your system board control and feedback on fan performance or failure.  Fans are selected based on rack mount enclosure thermal dissipation requirements as well as size, availability, voltage, watts, CFM, static pressure and noise.  Our fan solutions can encompass any axial fan you choose.

The hot-swap fan modules may have either one of two different grill or finger guard types.  Each has Pros and Cons. So here they are:

Every fan option, regardless of size (40mm, 80mm & 92mm), single or dual rotor, 2, 3 or 4 wire fan can be produced with either the perforation or wire finger guard with little cost differential between the two options.